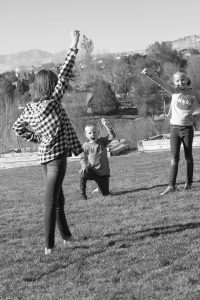 Reading classic philosophical works with kids can be really rewarding. My favorite to read with my kids has been Plato’s Allegory of the Cave because it’s a short dialog but is jam-packed with interesting things to discuss. However, teaching kids philosophy can be more than reading the old wise Greeks. Great experiences can also come by taking 15 mins with your kids to talk about an everyday concept and breaking down what it really means. Something we explored recently is leadership.

There are a lot of opinions about leadership. People have been studying it for centuries including philosophers Plato, Machiavelli and Sun Tzu. In recent times, contemporary academic studies have exploded with heavy focus in disciplines such as organizational behavior. A person can even get a PhD in leadership studies. Bookstores are so full of best selling books diving into all the nuances of leadership that the topic can feel a bit overwhelming.

My kids have been watching some of the classic Disney movies lately. I think they have figured out that appealing to my own nostalgia has a higher probability of me letting them watch the occasional movie after dinner. We’ve gone through Chitty Chitty Bang Bang and That Darn Cat but one of their favorites has been Mary Poppins.

After recently watching Mary Poppins, we talked about leadership examples from the story. In the movie, it is clear that there is dysfunction in the Banks family. Both parents have pursuits that take priority over their children. Mary Poppins, ever the creative problem solver, shows up to help the family solve their issues. The true magic about Mary Poppins isn’t her incredible bag out of which she can pull a lamp or her ability to jump carousel horses into a cartoon horse race. Her true talent is leading the members of the Banks family to solve their own problems.

There are, however, leadership qualities to be found in more than just the character of Mary Poppins. Here are some of the questions we discussed.

What is a leader?

My 9 year old said, “a person that people follow.” This was followed by my 6 year old with “somebody who tells you what to do.” These two responses are interesting because the first implies that the leader is good–of course a leader can also manipulate or threaten their followers–but I think she meant it in a way that people freely chose to follow. The second comment was a little more authoritarian in that a leader dictates what you will do.

As a side note, I’ve noticed that when people use the terms leader and leadership they imply good leaders and good leadership. You often hear phrases like, “that’s not leadership” or “we need a real leader.” I’m not making a critique of this but rather pointing out that in our discussion, we are trying to understand what makes a good leader good or a bad leader bad.

Which characters could we call leaders?

What are some of the BAD leadership qualities of these characters?

These were the answers from my kids. I had to lead them on some questions which is sometimes necessary (e.g remind them of scenes where the characters showed good or bad traits). In parentheses I put our followup questions.

What are some of the GOOD leadership qualities of these characters?

Do The Movie Exercise With Your Kids

Watch Mary Poppins with your kids and ask these same questions. See what they come up with and how they differentiate between good and bad leadership. If watching a movie is too long, there are short clips from plenty of movies that demonstrate leadership. Below is an example from Toy Story 2.

In this clip, Buzz takes the lead to get the toys across a busy street. This clip has traits kids can identify as good and perhaps bad. Buzz does have to use some skill and creativity to get the toys across the street walking with traffic cones over their heads but he does cause a lot of mayhem as they cross.

Another great activity is the “leading the blind-folded” game. This activity plays out in 3 parts and it’s good to have some extra people on hand to help participate. In each part there is a leader and a follower. The leader is trying to get the follower to arrive across a room at a certain object. The difference in all 3 parts is the method.

How Did It Work?

Discuss each part and what examples of good and bad leadership could be observed. Allow both the leader and the follower to give their perspectives. Talk about any analogies you can make between each part and a real life example (e.g. Part 3 shows what can happen if there are too many people giving directions. How would this work on a construction site if all the builders had their own interpretation of what they were building?)

Summarize with your kids what good and bad leadership looks like. Have them list behaviors and attributes. Share your own experiences. If you need to help lead your kids, here are a few ideas:

My favorite definition of leadership comes from Kevin Kruse: Leadership is a process of social influence, which maximizes the efforts of others, towards the achievement of a goal.

Good leadership qualities can include (but not limited to) the following:

Talking to kids about good leadership qualities can help guide them in their own leadership abilities. And in helping them recognize bad qualities, they can evaluate their own behavior and also the behavior of other kids who they might be inclined to follow. The best part is that it doesn’t require reading a business-level leadership book. We can take to heart the wisdom of Mary Poppins herself when she says, “Why do you always complicate things that are really quite simple.”