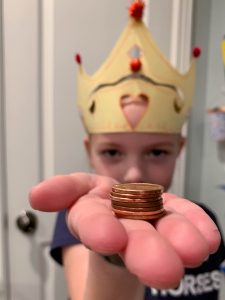 In another article about the Ethics of the Trolley I wrote about how I told 4 kids that I had only 3 candy bars to hand out. I presented the candy bar dilemma to them as an ethical question but below the surface of this jerky thing to tell kids is an economic question. How do you maximize economic justice?

The kids decided that cutting the 3 candy bars into pieces and equally dividing between all of them was the best approach. But that’s not the only way this could have gone. I could have handed them out according some some definition of merit. I might have given them to the 3 with the best grades or the 3 who completed the most chores. Rewards based on merit can sound just, but what if the playing field isn’t level? If one of the 4 kids is a 3 year old who doesn’t go to school or can’t reasonably complete the same chores as their siblings, is that really fair? Or is that a system that makes it impossible for some kids to get a candy bar?

Maybe the candy bar example is silly but debate never really stops about how an economy should work. Do markets that rely on a merit based system (i.e. you are rewarded by the system proportionally to what you put into it) provide enough economic justice? Or do we need some type of leveling force that is more fair (i.e. government created programs with goals to help specific socioeconomic groups)?

Is There A Level Playing Field?

Most people agree that a person who spends time to perfect a craft, works hard, stays late, is innovative and creates something of value should be rewarded by the market with wealth and success. It seems just that people should be able to keep their wealth as a result of this work. But does everyone begin their life as if it were a game of Monopoly where each person starts from the same square on the board and receives the same amount of money? If Monopoly reflected how life really works, some people would start with $0 while others $10,000. Some would already have properties with hotels on them while others might start from jail.

It’s clear that not all people start their lives with the same resources and advantages as others. It seems unfair that some people are born into a family where wealth is passed down–seemingly unearned. Political advantages can come with this that create even more wealth. Some people are born into loving families with attentive parents while others have absent, neglectful or abusive parents. Poverty in a child’s life will bring fewer educational opportunities, fewer examples of success and it often includes crime and a sense of desperation. If a person is particularly unfortunate, they might also have genetics that predispose them to learning disorders or psychological problems. Others have various combinations of these disadvantages that it makes success look simply impossible.

How Do We Make Things Just?

In light of the advantages and disadvantages that people are born into, the question is what should be done about it? To simplify our choices, we can think of managing justice in our economy with 3 options:

Most countries have some sort of mix. The United States falls heavier towards a merit system with elements of redistribution. Kids should have a basic understanding of how redistribution works, what problems it is trying to solve and evaluate if it is working. Here are a few games that can start conversation about these ideas:

This game is meant to help kids think about what is required for something to be just and if consistency is import.

You’ll need: a handful of pennies, use of each players hands (if you only have one child, play the game with them as a participant). 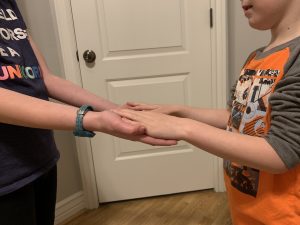 When you have completed 3 rounds of the hand slap game, discuss with your kids the following:

Have your child make a crown out of paper that can be placed on a head during this game.

Use the crown again for this game. You’ll also need a die with 6 sides or you can take 6 small pieces of paper and write 1 – 6 on them which can be drawn from a bowl.

To help give your kids more perspective about economic justice, it’s worth discussing Isaiah Berlin’s “Two Concepts of Liberty” written in 1958. Essentially Berlin is classifying liberty in two ways: Positive – having the personal ability to exercise free will; and Negative – freedom from outside forces restricting one’s actions. Here’s how the two relate to our discussion.

Positive liberty relates to this discussion in the sense that the disadvantages of some people interfere with their overall ability to exercise free will in their lives. When a person is set back by poverty, low education, racism, age, or lack of representation in government then it can be argued that they do not have liberty. You might explain that social programs by the government are often justified by this idea of positive liberty.

Government funded programs that provide healthcare (Medicare, Medicaid), retirement and disability support (Social Security), unemployment benefits, etc. are meant to help fix some of these disadvantages. But kids should also know that these programs are funded by redistribution–tax money that is compulsory. Paying taxes is not optional. This ties back to the exercise of the crown and the pennies. You might agree that these programs increase justice but the hard part is determining what the right balance is for redistribution.

Negative liberty is defined more as freedom from interference by government or other authorities. We find more references to this type of liberty in U.S. founding documents such as the Constitution: freedom of religion, speech, association, private property. In some ways negative liberty can work with positive liberty (e.g. freedom of speech can benefit those who advocate for a larger welfare state as much as those who want less of it) but conflicts in other ways (e.g. the right to private property is heavily challenged by the welfare state and positive liberty).

Where do you think the balance of justice lies when it comes to redistribution? It’s definitely a difficult topic to consider. And when you have 4 people who each want one of 3 candy bars, maybe the best answer is to eat them all yourself.