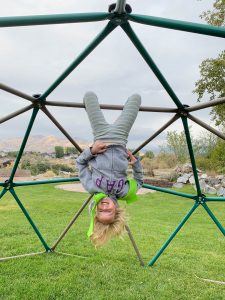 A couple months ago our family was gathered in our backyard with some extended family. My father-in-law was explaining a treatment for cancer he was about to have. People were talking quietly and respectfully because obviously it was a serious conversation. Out of nowhere my 6 year old daughter runs up to me yelling, ‘dad, watch what I can do on the climbing gym!” Without thinking I quickly walked towards her whispering “shhhhh.” She went from all smiles and excitement to confused and embarrassed. She didn’t know what she did wrong and you could just tell that her heart sank a little.

What she felt was shame. In this example with Audrey, it was mild shame and I realized it quickly and tried to fix it. We walked over towards the climbing gym together and I explained why everyone was talking quietly. She understood and I asked her to show me her trick hanging from the bars. Her feelings quickly passed while she showed me how she could hang upside down. As she was hanging there, I told her that I knew she didn’t intend to be rude or disruptive–I let her know that I understood her intentions. She smiled and we moved on with our evening. Sometimes these interactions don’t always go the right way. Like most parents, I’ve had snap reactions to my kids’ behavior that they don’t deserve and for which I didn’t resolve with them.

Children are like adults. They want to be understood and they want their intentions to be seen clearly. But kids feel shame from more than just impatient parents. Kids get if from bullies, friends, social groups, body image, etc. Shame inducing feelings which Dr. Brené Brown, a leading researcher on shame, says can be “deadly” and society is “swimming in it deep.” Shame is that little devil on a child’s shoulder that says, “someone like you can’t do this” or “why would anyone want to be friends with you?” These thoughts pile on and crush over time. Shameful thoughts can come on quickly or persistently nag as children grow older.

Shame Can Hit Anybody

Shame can hit anyone–even doctors. In 2009, the New England Journal of Medicine published research that found surgical teams who followed a 19-item surgical safety checklist saw patient-mortality rates cut nearly in half and complications fall by more than a third. Just a simple checklist.

Some checklist items are to make sure the surgical team is prepared for contingencies such as having enough blood on hand that matches the patient’s blood type. Other items are to avoid what hospitals call “never events” because they should NEVER happen–for example, are all the sponges used in surgery accounted for after the procedure? Is this the right patient? Are we operating on the right body part? In many cases the checklist is trying to avoid common assumptions that “somebody else must be taking care it.”

A critical-care specialist at Johns Hopkins Hospital named Peter Pronovost was such a believer in checklists that he became a traveling advocate to other hospitals. Surprisingly he was met with some resistance. Some physicians were offended by the idea that they needed something so seemingly trivial as a checklist. The reaction of one doctor was, “Forget the paperwork. Take care of the patient.”

In medical school and beyond, physicians are taught to do these very technical, precise, and in some cases amazing procedures. They are frequently the smartest person in the room. The notion of needing a checklist to safely do their job can be shame inducing. Doctors, like the rest of us, often instinctually react defensively to things this way. They were trying to avoid that shame by pushing back on the findings.

Is Guilt The Same As Shame?

Shame, however, can lead to far worse problems than stubbornness to change. Dr. Brown draws important distinctions between guilt and shame because the two are often used interchangeably. She says guilt can be adaptive and helpful – it’s holding something we’ve done or failed to do up against our values and feeling unsettled. Shame is a deep painful feeling of believing that we are flawed and therefore unworthy of love, belonging or acceptance. Guilt vs shame is saying: I did something bad vs I am bad.

Shame is highly correlated with addiction, depression, bullying, suicide, aggression, and eating disorders. Guilt is inversely correlated with these things. This is why it’s so important to talk to kids about what shame is and what it feels like. Dr. Brown says: “The less you talk about it, the more you got it. Shame needs three things to grow exponentially in our lives: secrecy, silence, and judgment.” The antidote, she says is empathy. By talking about shame with someone who expresses empathy, the painful feeling cannot survive. Shame depends on the belief that you are alone.

How To Talk To Kids About Shame

A couple days ago I talked to my kids about the difference between guilt and shame. I also told them the checklist anecdote and how some doctors were slow to use them. When I got to the part about checklists cutting patient deaths in half, my 8 & 9 year old thought it was interesting but Audrey (6) heard: “using checklists cut patients in half.” She thought patients were literally being cut in half. I tried to clarify but her response was “doctors should just know that they should NEVER cut a patient in half!” So I’ll probably talk about this again in a year or so with the younger ones and maybe use a different story.

Additionally, here are some of the other things I brought up that you might want to try with your kids:

Here’s another activity. The following are some common phrases kids might tell themselves that encourage shame. Have them think of an alternative for each statement that is healthy and positive. For example, the first phrase might be better stated as “I need to do what I know is right and best for me even if others don’t approve.”

I think the win for us is that our kids now know about shame and are more aware of thoughts that lead to it. And we could all agree that nobody deserves to be cut in half.