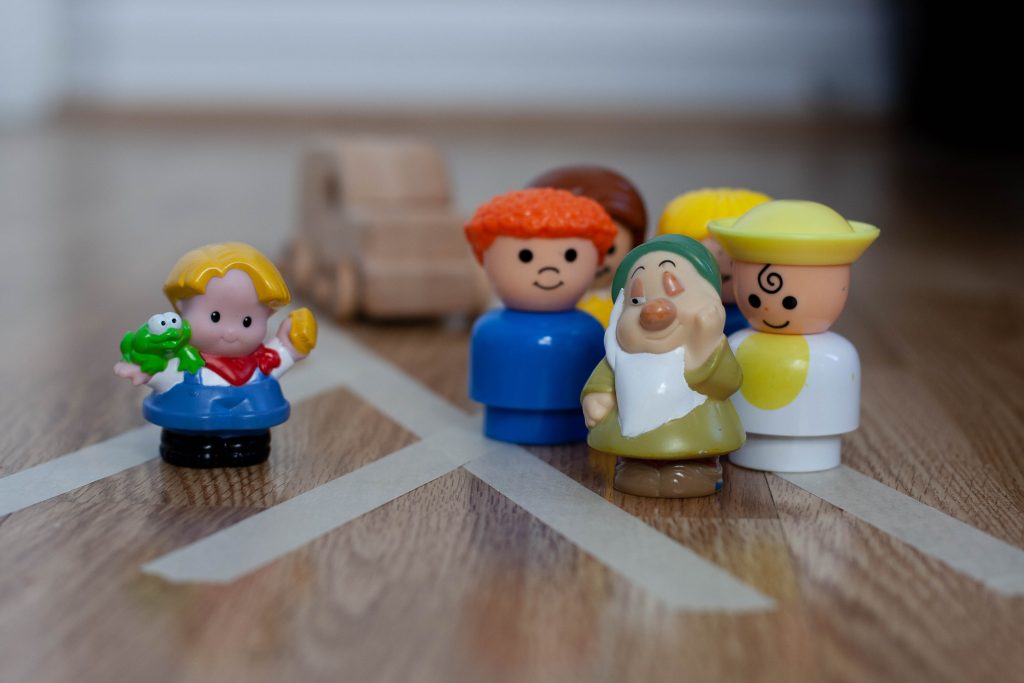 If the occasion ever arises where I can give my kids an ethical dilemma to solve, I like to do it. It’s especially fun if I can wind them up with some light hearted torment. This is an example of the type of scenario I’m talking about:

I know. It’s mean, but it is also very interesting to watch how they respond. You can almost see their brains working–thinking about what to say as they weigh how much they want a candy bar. Sometimes I’ll directly ask my 3 year old if she would go without one. She immediately says “Nooooo!” My 8 year old (who really likes to resolve conflict) will usually volunteer to go without so all the others can have one. My 5 year old mostly stays quiet as he really wants the candy bar and doesn’t want to volunteer his away. Someone eventually proposes that we cut the candy bars up and divide them equally among each of them. This solution seems to make them happy and then it evolves into a math problem: figure out how to divide 3 candy bars into equal distribution. So what starts as me being a little mischievous ends with an ethical problem solved by them that they can all be proud of.

The ethical dilemma of the candy bars is easily resolved into a good outcome. But there are sometimes ethical questions that require us to choose between multiple bad options. A classic example is the problem of the runaway trolley that was first introduced by Philippa Foot in 1967 and then later modified by Judith Jarvis Thomson.

Should You Flip The Switch?

The first variation of the problem goes like this. There is a runaway trolley heading down a track. Shortly up ahead are 5 people on the track who are either incapacitated or otherwise unaware that the trolley is going to hit and kill them. You are witnessing all this and are standing near a lever that can be pulled to switch the tracks. Switching the tracks will send the trolley in another direction that will hit and kill 1 person. 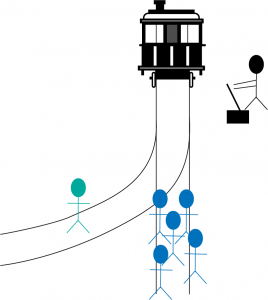 There are only two options:

Which is the more ethical option?

Let your kids give their answers to the problem. You could even have them draw the scenario (or use toys as we did) as they answer. If your kids are like mine, they will come up with a bunch of alternative things to try like: yell at them to move, throw rocks to get their attention or send them a text message that they are about to die. As improbable as this scenario is, only 1 of the 2 options can be selected.

When I first went through this exercise with my kids, we put masking tape on the floor to represent the trolley tracks (including those that diverge from the main tracks). Then we used my 5 year old son’s wooden car (he raised an eyebrow when his sister’s asked to borrow it because they had never taken an interest in his toys before). We got 6 Fisher Price people to place on the track and the setup was complete. Allowing them to set up this scenario for themselves really got them engaged in answering the question.

Should You Push Him?

After you and your kids have made your decisions about the problem above, consider this variation. Rather than a lever that you can pull to switch the track, there is a man standing next to the track. The only way to stop the trolley is to push him onto the track, killing him but saving the other 5 further down. (Note: this is a modified version of the footbridge variation which describes a “fat” man to be pushed onto the tracks. I modified it because being “fat” often causes people\kids to laugh and can subconsciously affect their willingness to push the man.)

You again have two choices:

Which do you choose? Do you push the man? Here are a few things to consider:

How Other People Respond To The Trolley Problem

The trolley problem highlights some of the tugging and pulling between two bodies of thought in ethical philosophy.

In short, utilitarians believe that your actions should do the “greatest good for the greatest number.” Jeremy Bentham is widely credited as the founder of utilitarianism and says that a choice such as the trolley problem should come from the “sum of all pleasure that results from an action, minus the suffering of anyone involved in the action.” So to maximize the greatest amount of “good” the utilitarians would say that you not only pull the lever in the first example, you would also push the man onto the tracks in the second. The saving of 5 lives with the sacrifice of 1 has the same net outcome–and this should guide your decision.

The deontological approach says that killing an innocent person is wrong–even if there is some good that comes with the consequences. Immanuel Kant explained in his categorical imperative that you should never treat another person simply as a means but always at the same time as an end. In the case of the trolley, pulling the lever treats one person’s life as a means to save 5 others. Similarly, pushing the man onto the tracks would also be immoral as it intentionally kills an innocent person. In both cases the deontologists believe the only moral decision is to do nothing and allow the trolley to continue and kill the 5 people on the tracks.

Given the stances of the utilitarians vs. the deontologists, most people answer the two trolley variations split between the two theories. When it comes to pulling the lever, most people take the utilitarian approach to maximize those who are saved–but it seems they only choose this because of the passive way in which the 1 person is sacrificed. Pushing a person onto the tracks requires a much more active role and crosses a line which most people aren’t comfortable with. The deontological approach wins in the second variation because actively killing someone is too high a threshold to justify the end.

Neuroscience has researched what happens in our brains when considering the two variations of the trolley dilemma. When we think about pulling the lever it activates the prefrontal cortex which is the part of our brain responsible for logical and complex thinking. This explains our decision based heavily on saving the largest number of lives.

When presented with the option to push an innocent person onto the tracks, the emotional reasoning part of our brain lights up. It is our emotions that are taking over. But perhaps there is an explanation for this. Social science has explained that we have evolved to live socially within tribes. Because of this, we learn early that violence directed towards others will be punished and our sense of morality tells us that such actions are wrong.

Is The Trolley Problem Too Unrealistic?

For as long as the trolley problem has been around, there have also been critics who say that it is too unrealistic. These critics do have a point. Such a scenario playing out with a person exactly in the right place to make a moral decision with these narrowly limited options is probably not going to happen. But the experiment still has value. It illustrates the complexity in making moral choices, how we view human life and the different sources of our values (logical, emotional, cultural, tribal).

Going through this exercise was valuable for my kids. The question of pushing a man onto the tracks really got my 8 and 9 year old thinking. Both first responded that they would not push him. When I asked them if their answer would change if the man was a murderer, my 9 year old said she might change her mind. My 8 year old quickly said that she probably wouldn’t because he is still a person (clearly she’s a natural deontologist). I also had them setup the problem for their grandfather and ask him what he would choose in both variations of the problem. Watching them defend their decisions was priceless.

The Problem For Self-Driving Cars

Then again, perhaps the trolley question isn’t that unrealistic. Self-driving cars are on the horizon and with that comes a renewed discussion of these types of moral decisions. It is highly probable that computer code will need to make choices between multiple harm-causing events. Here is another scenario to have your kids consider. A self-driving car is traveling down a road with 2 passengers. It turns a bend and there is a person in the road. There is not enough time to stop before hitting the person. If the car decides to swerve to the left into oncoming traffic, it will hit another car with passengers. If it swerves to the right, it will go off a cliff and surely kill the passengers. What would you program the car to choose? 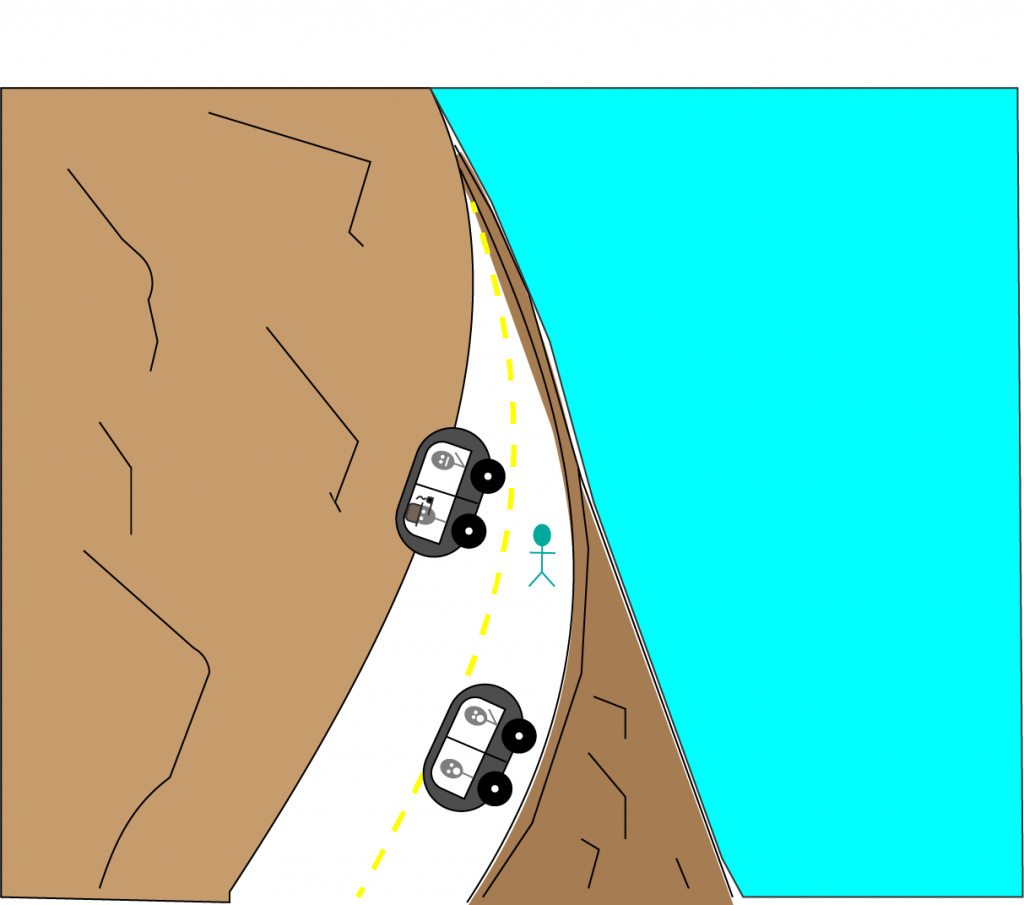 Which do you choose? Here are a few things to consider:

The kids of today will likely face more and more ethical problems related to technology. Giving them experience thinking through what is moral, how we should value human life and how to support their reasoning will only help them make sense of an ever-changing future.