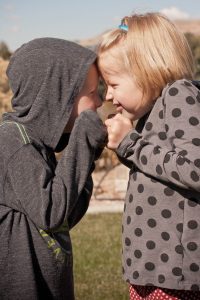 When I was about 9, the kids on our street had this intense rivalry with kids a few streets away. In the beginning I wasn’t sure how it started but knew it was definitely fueled by our perceived differences. They wore Raiders gear and we wore 49ers. We rode skateboards and they BMX bikes. They wore parachute pants and we…also wore them (with the exception of me who wore JC Penny corduroys which clearly killed our street-cred).

The Tribe of Thunder

The other street kids were led by a kid named Thunder which, as far as we knew, was his real name. Thunder would often ambush us as we walked to the park to play baseball–jumping out of trees to pelt us with walnuts . One hot summer afternoon, Thunder and his crew came around the corner on their bikes. Three of us were sitting under a tree trading baseball cards. Before we knew what happened, two black trash bags were emptied all over us. We jumped up to chase them but we had banana peels, egg shells, pieces of potatoes and used Dixie plates all over us. We later got revenge by throwing water balloons over the fence at one kid’s house while his family was having a birthday party (we got grounded for that one).

Thunder moved away at the end of the summer. In a moment of detente, one of the other kids told me that Thunder’s mom had died months ago and his dad was always drinking. He finally went to live with his grandparents in Fresno. My feelings quickly turned sympathetic for Thunder–I had no idea. Turns out, the rivalry started because Thunder saw my friend Jeremy yell at his dog. The kids on my street and the kids on Thunder’s street thought the worst of each other because we didn’t know each other. This is tribalism and just as it can cause kids to throw trash at each other it can cause adults to exclude, hurt and even get violent.

There’s no better example of tribalism than sports. And the rivalry between the Boston Celtics and the LA Lakers in the 1980s was legendary. You had 3 options: Lakers, Celtics or who cares. Nobody liked both the Lakers and Celtics. You had to pick a side. In 1984, Larry Bird triumphed over Magic Johnson to lead the Celtics to an NBA Championship win. You can see in the last few seconds of game 7 that before the ball even hits the rim, fans pour onto the court and quickly overwhelm anybody on it (security has come a long way since the 80s).

People in Boston went nuts! They poured out into the streets. Fans acted like they completely dominated the other side. They danced in the street, screamed, stopped traffic and jumped onto the hoods of cars. It seemed that everyone in Boston felt good about themselves that night. But none of them played in the game. They drank beer, ate hot dogs and watched. It was a witness of something primitive where the triumph of the tribe caused individual satisfaction. The tribal identity helped the personal identity which gets at the interesting interaction between the two.

We Need to Belong But There Can Be a Dark Side

Being social by nature, we want to belong. We need to belong. People who don’t have enough social connections have a shorter life-span, increased risk of dementia, get depressed and are more irritable. Research bears this out with findings that those who are socially disconnected have an increased risk of death by at least 50%. That’s a lot and it’s about the same damage as smoking. So excluding the drunken outbursts and neglected families perhaps hanging out with sports buddies is healthy.

Our social groups can vary widely and might be family, friends, colleagues, teammates, coworkers, church or military related. These social groups or tribes allow us to share values, rituals and provide support. We get a lot of positive experiences out of these groups and our lives are better for it.

However, tribalism can quickly be taken from the mostly harmless example of sports to a dangerous extreme. Nazi Germany starkly defined their tribe as a superior race. Countless other examples can be found in the world where ethnic and religious tribalism has turned tragic: the former Yugoslavia between Serbs, Croats and Bosnians, Belfast between Protestants and Catholics, Bagdad with Shiites and Sunnis, Rwanda among the Hutu and Tutsi and Kashmir between Muslims and Hindus. In the United States we are witnessing escalating tribalism between the two major political parties. Americans seem to be tied less to ideals and more to their party dominating the other.

We are humans. We’re complicated. We invented wonderful things like airplanes, Disneyland and Beyonce. Yet humanity’s darker side has also given us racism, war and Slim Jims. This dilemma is what we call the human condition: selfish in some instances, selfless at others. We naturally have these two impulses tugging at us. Jared Diamond explores traditional societies in his book The World Until Yesterday. He explains that suspicion and distrust of strangers is a common element in most traditional societies.

We are wired this way. Social psychologists did studies by putting people who didn’t know each other into groups. Quickly people in these groups started to judge the other groups as less trustworthy and less fair. And even when people in these groups where told that they had been selected arbitrarily, the prejudices still formed.

Our Brains Are Programmed to Discriminate?

It’s true. Our brains are programmed to discriminate. Here is what biologist E.O. Wilson says:

When in experiments black and white Americans were flashed pictures of the other race, their amygdalas, the brain’s center of fear and anger, were activated so quickly and subtly that the centers of the brain were unaware of the response. The subject, in effect, could not help himself. When, on the other hand, appropriate contexts were added—say, the approaching African-American was a doctor and the white his patient—two other sites of the brain integrated with the higher learning centers, the cingulate cortex and the dorsolateral preferential cortex, lit up, silencing input through the amygdala. Thus different parts of the brain have evolved by group selection to create groupishness, as well as to mediate this hardwired propensity.

Wilson is basically saying that your amygdala often acts like an embarrassing uncle making an off-color comment at a family picnic. It’s not all his fault because, well, your uncle never really learned when to keep his mouth shut. Like that uncle, we have these snap thoughts that pop into our heads without any control but it’s the responsibility of the other parts of our brain to step in and offer context. Scrutinizing what the amygdala yells at us is where we need practice.

Here are the things kids should know about what is going on in their brains: